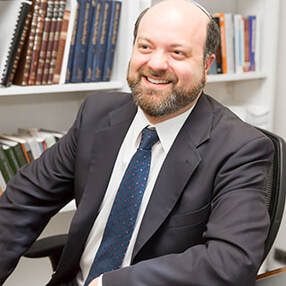 Dr. Eitan P. Fishbane is Associate Professor of Jewish Thought at The Jewish Theological Seminary (JTS), where he teaches students in all five graduate and undergraduate schools. Fishbane earned his Ph.D. and B.A., summa cum laude, from Brandeis University, and he served on the faculties of Carleton College and Hebrew Union College-Jewish Institute of Religion before coming to JTS in 2006. A 2015-2016 JTS Chancellor's Fellow, Fishbane recently completed a term of service on the Faculty Executive Committee; he serves on the Rabbinical School Council at JTS, as B.A. and M.A. Advisor in Jewish Thought, and as Division Chair for Jewish Mysticism at the Association for Jewish Studies (AJS). Among his published works are The Art of Mystical Narrative: A Poetics of the Zohar (Oxford University Press, 2018) and As Light Before Dawn: The Inner World of a Medieval Kabbalist (Stanford University Press, 2009). Fishbane was a 2011 recipient of the Charles A. Ryskamp Fellowship from the American Council of Learned Societies.
​

​The Art of Mystical Narrative:
A Poetics of the Zohar
Oxford University Press, 2018

“For specialized scholars, Eitan Fishbane’s The Art of Mystical Narrative is clearly a deep and original work that will reorient thinking about the Zohar.  For non-specialists, it offers something just as important: a fascinating, sophisticated, and persuasive account of how ethical meanings are conveyed in narrative. A triumph to be celebrated.”


"In this groundbreaking and brilliant study, Fishbane explores the poetic artistry of the Zohar, enabling us to appreciate the masterpiece of Kabbalah in radically new ways. He highlights the theatrical/performative dimension of zoharic narrative and its magical realism. Significantly, he locates the Zohar in the context of medieval Spanish literature, both Jewish and Christian. Fishbane's erudite and fascinating book demonstrates how the Zohar is simultaneously a bold mystical interpretation of the Torah and an experiment in medieval fiction."

Daniel Matt
Author of the multi-volume annotated translation The Zohar: Pritzker Edition,
and The Essential Kabbalah
order from oxford university press
order through amazon
"A work of dazzling literary scholarship. This penetrating analysis of a Judaic classic employs the full range of tools and insights available to the contemporary reader. The Zohar is a profound and mysterious work that has long attracted scholars who seek to swim in its depths. In Fishbane, it has found one who happens to write in English and knows the whole Western literary canon. That in itself is a miracle worthy of Rabbi Simeon ben Yohai. If you have the Zohar in your heart, you must have Fishbane on your shelf."  -- Arthur Green, Rector and Irving Brudnick Professor of Jewish Philosophy and Religion,
​Hebrew College

"In his exquisite and wonderful book, Eitan Fishbane illuminates the ways in which the literary aspects of the Zohar are intimately woven to the core of the Zohar's mystical and interpretive insights. From Fishbane's masterful presentation we learn that the poetic and dramatic dimensions of the Zohar do not serve merely as a narrative frame to its content, but rather they embody, enact and perform the calling of the master of the mystical circle and his disciples. Fishbane's careful and brilliant readings add another dimension of depth and wonder to our encounter with the Zohar and his work is a major contribution to the ongoing exploration of one of the greatest literary and religious achievements of the Jewish tradition." -- Moshe Halbertal, Gruss Professor of Law at New York University, and John and Golda Cohen Professor of Jewish Philosophy at the Hebrew University of Jerusalem
​
"Fishbane's study of the interplay between fictional discourse and mystical exegesis combines the Kabbalah scholar's mastery of Jewish intellectual history with the literary critic's sensitivity to language and form. Through engagement with modern frameworks of criticism-characterization, dramatic speech, degrees of fictionality, structural framing-Fishbane draws the reader deep into the literary world of the Zohar's Iberian Jewish author(s) and readers and its unique vision of reality. The book is pioneering in that it truly appreciates the Zohar for what it was—a work." -- Jonathan Decter, Edmond J. Safra Professor of Sephardic Studies, Brandeis University